The Beach/Boat Vision was received by Anna Boulter in 2001. People and places have changed since but much of the description explains how we work as a church.

The Beach & Boat Vision was received by a member of Hope (Anna Boulter) in 2001. Some of the people, relationships and ministries have moved on since then but much of the description communicates the vision and heart of Hope. As a church we have 4 primary dreams and we can see these expressed in this vision:

We want to be a place and people of constant prayer and worship. Notice how each of the boats have worship leaders on board and how worship is part of their mission.

We want to be a church that children love to be part of. Notice how the children are involved in all aspects of the work, including preparing treats to go into the boats.

We want to be a place of hope for people on the margins of society. Notice how Hope’s boats go out to deep waters. This passion for the most vulnerable is part of Hope’s DNA.

We want to be an authentic community. Notice how it says “No-one felt ready or equipped” but they got on with the work anyway. We love the sort of humility that doesn’t pretend we’re all sorted ourselves but engages with God and His purposes enthusiastically as we become increasingly the people He has made us to be.

Richard Higgs has painted the vision on the banner that hangs in the hall in Hope Chapel.

Where is your place in the picture? 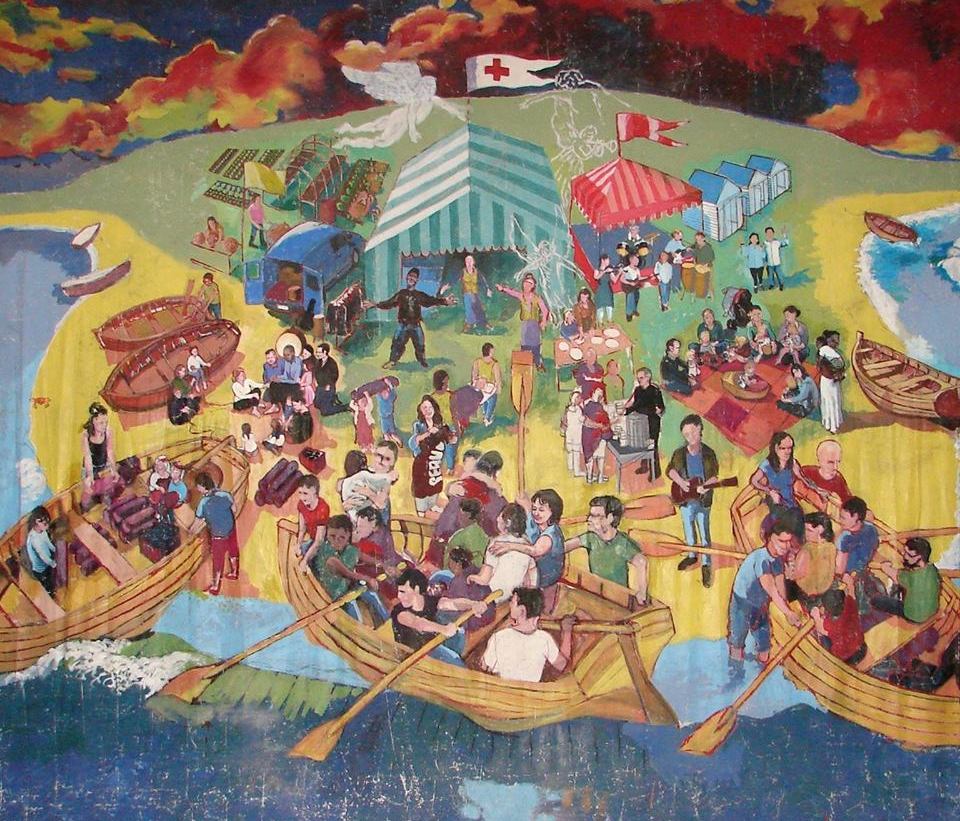 “Something to pray and think about perhaps…

On Monday 3rd September [2001] I prayed for a girl from Christ Church Fulham.

I had a picture of her standing among some cardboard waves that were to-ing and fro-ing. There was a painted sky behind her and there were a few little cardboard boats and things on the water (it looked like the set of ‘Let’s Pretend’). She was watching this and was praying and was enjoying herself.

Then I asked Jesus to come into the picture. He walked up and took her by the hand and led her out and it became apparent that it was just a TV set and behind it was the real sea. At first that was nothing much happening. They sky was grey and the waters were choppy and as he led her down to the beach boats started to appear on the shore and very quickly it became a hive of activity.

I saw Jesus take her to a boat and teach her how to make and mend fishing nets in a very specific way so as to make them as strong, flexible and durable as possible. Then He left her to it and she went from boat to boat tending to the nets.

Then I noticed others from Christ Church all doing different things.

Stuart and the assistant pastor had a boat and were shouting to others, urging them and encouraging them with great passion whilst hauling the emptied nets back onto the boat and then going out for another catch. But they weren’t catching fish they were catching people.

The youth workers had a boat and were doing the same thing with young people and other adults helping them. They were catching young people in their nets. The children’s worker had her own boat, with adults and children helping her. They were trawling up hundreds of children.

The children were also helping with all aspects of the work.

I saw one of the adults co-ordinating kids putting food on the boats for immediate sustenance and putting other little things on the boats as extra blessings to the rescued, pretty creative things and the kids were adding their own bits and pieces.

At the back of the beach there was a big makeshift recovery place, with beds, more food, medical supplies, warm, dry clothing etc…

In front of Recovery were rows of tables on which people were preparing the food supplies for the boats.

Each cell group had it’s own boat. With each group everyone was mucking in. People would go out on the boat sometimes, take people to recovery other times. Mainly people would major on one specific task but would all do some of the other stuff too.

A lot of people were training and encouraging too, both those who were already saved and the newly rescued.

People working full time in other ministries (with Grandmas etc.) were on other boats with their colleagues but had no recovery of their own so were taking people to different recoveries at different churches.

People with specific ministries like these and the youth and children’s workers weren’t just getting their target audience but were catching their friends and family too.

The worship leaders were all on boats with their cell groups but each time their boat came in they would raise their hands to the sky and worship. The whole place would join in whilst carrying on with their work, with overwhelming joy and celebration. They’d do 1 song and then carry on!

As people were rescued some only needed to have a short rest in recovery, some needed treatment and some were in critical conditions and needed to be there for a long time. But however short their stay they all ended up on the beach helping with the rescue operation.

As numbers grew, the more experienced split off from their original boat and took a new bunch of people out.

The boats just appeared, all the supplies, boats, nets, food, medicine just appeared like the feeding of the 5,000.

There was no time for cleaning the boats, they weren’t in pristine condition but they were sufficient and sturdy enough to do the job.

No-one felt ready or equipped. It has just started happening with no warning and so they just had to get on with it and found they could do it. This caused much praise and worship within the throng! Any everyone was praying and praising and thanking the Lord as they worked.

Then I started to be lifted up and got a more birds eye view and along side Christ Church I saw Wolfi (a neighbouring pastor to Christ Church) and his church and all the other churches in London, all working together and encouraging one another and helping each other out. No-one was going it alone.

Then I went higher and saw that this beach stretched for miles all around the coast of the UK. Then I came back down further west and saw Hope Community Church who had only one boat and they were going further out than everyone else and getting such heavy catches it was a real struggle and everyone was having to do everything because there weren’t enough people. Also because of the depths they were going to, the people they were rescuing needed far longer in recovery and therefore were unable to jump on the beach and help and resources began to be strained.

The Lord saw this and was thrilled at their faith and so began to graft in a lot more people from other churches from all over the coastline. At this point I touched down again and began to join in and realised that I had been taken from Christ Church and was one of the ones God had chosen to graft into Hope.

Then more and more of the churches got alongside them and started joining them in going as far out into the water as them.”